The curse of Vrubel beauties Mikhail Vrubel. Hamlet and Ophelia 1883. The curse of Vrubel beauties

The curse of Vrubel beauties
In many paintings of Mikhail Vrubel the viewer can guess the image of his wife, a wonderful singer Nadezhda Zabela. According to a legend, a knight Geoffroy Rudel fell in love with the beautiful Melisande, never having seen her, and went to search for this wonderful princess. Vrubel also fell in love with the singer’s voice Zabela, and having seen her only once, he immediately offered her to become his wife. Their love was like a fairy tale. It failed to fade even during the tragic illness of Vrubel.

Mikhail Vrubel loved to invent unusual theatrical costumes for his beloved. he created for her a flowing dress of sea princess. And then imprinted her image in watercolor “NI Vrubel as Volkhova in the opera of NA Rimsky-Korsakov’s “Sadko”.

In the portrait of 1898 the artist’s wife depicted in a dress for a walk, but she turns in it into some unknown flower – the rose, chrysanthemum, carnation? … Noteworthy, the artist didn’t give name to this strange dress in which two translucent covers – pistachio and purple – shine through one another. But each author’s work should have a title.

In the opera “The Tale of Tsar Saltan” wife of the artist Nadezhda Zabela-Vrubel sang the part of Swan Princess. In fact, the artist himself created both the costumes and scenery for a play. In the picture on the background of shimmering sea appears the main character of the tale. And before the eyes of the viewer magic actions are happenning: right wing of the princess has already turned into the pearly foam of the sea, and the left as if into stone, freezing with pearl plumage. Also, in the picture there is a special secret of merging images of a swan and a princess. And the princess’s hand decorated with rings looks like an elongated bird’s head. Take a good look, and you will see on the canvas not one, but two beings. Yet without losing the original appearance of the swan in front of you, it “turns into” a mysterious maiden. For Vrubel his wife has always been a woman from a fairy tale.

In the painting ‘Faust’ even the wrong facial features, elongated hands, Vrubel turns into some magical appeal. He gives her delicate features even to Margarita – beloved of Faust, the hero of the medieval legend who received eternal youth, giving to the devil his immortal soul for it. Panels depicting these characters were written to decorate the mansion of Savva Morozov.

Tamara and Demon, 1890. Figure of Margarita grows in the garden as radiant tree, like embroidered with light puncture line-stitch. It is the Spirit of the Eternal Feminine, which at the end of the XX century inspired dreams of artists and poets. Margarita has not been created for the coarse material world, as “a fleeting vision” she is ready to dissolve in the world of flowers, trees, clouds. But the devil – in its realization – Mephistopheles – creates intrigues: Faust, madly in love with Marguerite, forced to flee her city, and she goes crazy.

Mikhail Vrubel (March 17, 1856 – April 14, 1910) – one of the few true geniuses of Russian artists. Paintings of Vrubel – real gems of talent, inspiration and poetry among the dull and dreary paintings of the turn of the century. In Russia, there were many talented artists, but geniuses – few, and one of them is Vrubel.

The curse of Vrubel beauties 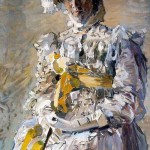 1898 Portrait of N. Zabela-Vrubel (highlights on the stage dresses, ornaments on it look like the outline of the lips) 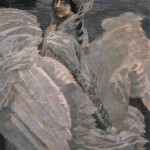 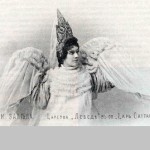 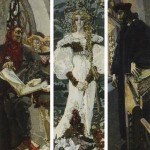 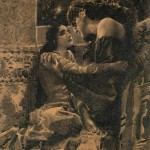 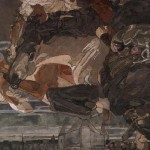 Flight of Faust and Mephistopheles, 1896 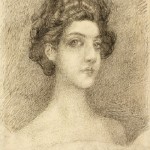 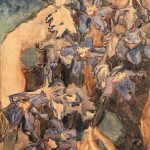 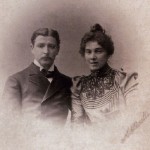 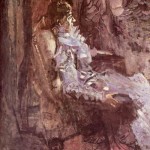 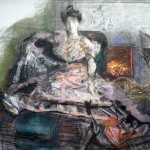 After the concert. Unfinished portrait of Nadezhda-Zabela Vrubel 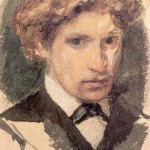