Fairy tale happiness by Vasnetsov
Almost every fairy tale hero expects reward similar to “Emelya” happiness – love of beautiful girl and wealth. But happiness has to be earned or won. Available hero is strong, and most importantly, kind. Not all the heroes are winners – only those who fight against evil. This path is not easy. Hurtling through a dark, scary forest the Gray Wolf, saving Ivan Tsarevich and Elena the Fair. Her golden hair waving on a wind. The speed with which the wolf carries them is enormous: even heavy sword of Ivan Tsarevich soared up into the air. Elena the Fair seems half asleep. Her patterned robe of blue silk, can not seem to warm her. But Prince tenderly holding her in his arms. Vasnetsov shows in a picture how passionate feelings in a cool, gloomy forest make a real miracle – on apple tree branch, unexpectedly here in the wild forest, bloom sweet as love in the hearts of fairytale characters, flowers. Angry man will never be happy. Like Koschey, he will languish and wither over his treasures, and immortality will turn his eternal fear of losing them.

But what happiness and peace emanates from the painting of Viktor Vasnetsov “Carpet – Plane”! In the sky, among the soft gentle clouds fly on the carpet – plane Ivan Tsarevich and Elena the Fair. The carpet – plane soars in the sky turning pink over the river. Milk fog comes down the river – the bank of which gets real milk color. The fog as if continues the river in a fantastic heavenly kingdom.

Flying on the carpet – plane in the picture Vasnetsov – the embodiment of the eternal human dream of happiness and peace at the end of a long journey, after adventures and trials.

In the painting by Vasnetsov “Sivka – Burka” sounds provocative slogan: “You want to be happy – do not be afraid, tempt fate!” Ivan – fool dreamed to marry the daughter of the Tsar. What a nonsense! Before that, he was sitting on the stove unkempt. And suddenly – “clame into the right ear of Sivka- Burka, got dressed, jumped out of the left ear – handsome and well dressed Ivan.” People near the towers marveled at him: what a handsome man. Reared his horse and golden-hair horse jumped up to the window of the Princess. Ivan will have time to kiss her, and there is no doubt – the flight of a lucky fellow will end in the wedding.

The outfit of the three princesses of the Underworld symbolises the richness of mineral resources Russia is famous for – gold (left princess), precious stones (middle), and coal (right). Clothing and headgear of one of the princesses seems cast in gold. Such tissue during ancient Rus was called “Aksamit.” It seems that it is bewitched, can stand by itself and not fall. And the secret here is not a fairy-tale: the basis of Aksamit were gold and silver threads, similar to a thin wire. The dress of this fabric could weigh a few pounds and “hold” shape. Precious crown for the second beauty is adorned with gems, like the rest of her outfit.

And next to them is a modest youngest princess. She guards the dungeon of treasures. No, it’s not jewelry. They gleam in the foreground of the picture. Famous artists’ patron Savva Mamontov commissioned Vasnetsov for painting his office when supervised the construction of the Donetsk railway, by which these treasures were brought.

Stories for fabulous paintings gave to the artists life itself. If we look at the famous painting “Alenushka” with fresh eyes, we can admit that the girl bears little resemblance to a fabulous character. Once Vasnetsov met a barefoot village girl in Abramtsevo, she struck him not by her beauty, but the expression “anguish, loneliness and sadness, purely Russian” on the face. Depicting her in the picture, he gave her some secret attraction. Alenushka has already wept all her sorrow, sharing it with trembling aspen and sharp reeds. 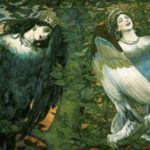 Alkonost and Sirin. Painting by Vasnetsov 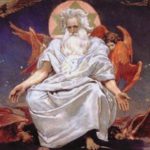 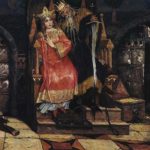 In the Kingdom of Kashchey 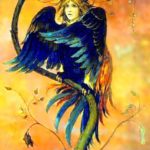 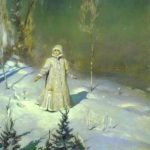 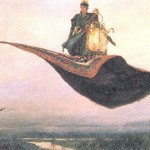 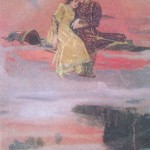 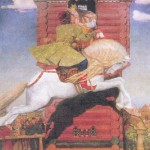 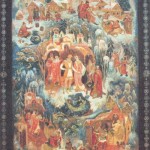 V. Harchev. By magic. The painting on the box 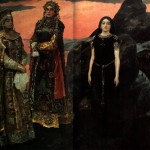 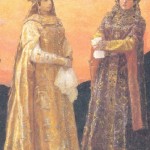 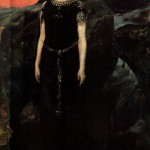 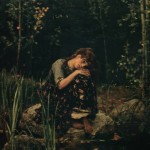