Marc Chagall Stained Glass windows
Noteworthy, Chagall lived for nearly one hundred years, and 80 of which he had spent creating a fantastic world full of biblical legends, people and things around him. It is a story interspersed with reality, past and present. Chagall charmed all with his beautiful poetic works, soft and fabulous images. Meanwhile, since the late 1950s, Chagall has made a lot of stained-glass windows for Catholic churches, Lutheran churches, synagogues and other public buildings in France, Italy, USA, Israel, Switzerland and the United Kingdom. Stained-glass windows of the church choir of St. Stephen, Germany. By the way, Chagall conceived stained glass windows as a symbol of reconciliation between the German and Jewish peoples. Stained-glass windows of the church choir of St. Stephen, Germany

The original stained glass windows, the works of Marc Chagall, are perhaps the most impressive part of the cathedral in Zurich Fraumuenster .. Five windows, the size of a meter wide and ten in length, strike with their radiant color – a bright, saturated, not customary for the eyes, it seems unearthly. As always, it is Chagall’s recognizable colors – deep blue, ruby red, emerald green, red. If you look at the spiral, you can read the history of Christianity, from the Old to the New Testament, from the window of the Prophet, further – window of the Law, then Jacob and Zion, the composition is finished with the window of Jesus. Over 900 years Chichester Cathedral receives visitors who bring to the Lord their sorrows and joys. Believers who seek and tourists pass through the doors of the temple. And filled with joy light penetrates through the cathedral decorated with fascinating stained glass windows. One of these windows painted Marc Chagall. The plot of stained glass – line from Psalm 150: “… every breath praise the Lord.” A gift of Chagall to the United Nations

These stained-glass panels – a gift of Chagall to the United Nations – dedicated to the memory of Dag Hammarskjold, who held the post of UN General Secretary- from 1953 to 1961 and who died in a plane crash during a routine mission of peace. Since 1266 in the historic Sarrebourg was a monastery built by Franciscan brothers. Despite the cultural and historical significance (in 1927 in the monastery was opened the museum), threatening the collapse a significant part of the buildings was demolished in 1970. Only a small chapel survived. To close a gaping hole in the west wall of the chapel and to give a more modern and festive appearance, city officials commissioned Marc Chagall. In 1976, the Franciscan chapel was decorated with “Mir” (“The World”) – stained glass window height of 12 meters, a width of 7.5 meters and weighing 900 kg. It is the largest stained glass installed in Europe, it is consonant with the theme of the glass panels, which the artist presented to the UN. Like many stained-glass windows by Chagall, “The World” is made in the workshop of Charles Brand Reims.

One of the most famous works by Chagall in Israel are the stained glass windows in the synagogue of the Hadassah hospital in Jerusalem suburb of Ein Karem. The synagogue is visited not only by believers, patients, but also by ordinary people who want to see one of the timeless works of the great masters. Located in the Judean hills west of Jerusalem synagogue was built in the shape of a rectangle. For its coverage (both physical and spiritual) were made 12 windows filled with stained glass. Each of the stained glass featured one of the four primary colors – blue, red, green and yellow with different shades.

The light that emanates from the twelve stained glass windows bathes the Abbell Synagogue at the Hadassah University Medical Center in a special glow. The sun filters through the brilliant colors of the stained glass capturing their radiance. Even in the misty haze of a cloudy day, Chagall’s genius transforms time and space.

“This is my modest gift to the Jewish people who have always dreamed of biblical love, friendship and of peace among all peoples. This is my gift to that people which lived here thousands of years ago among the other Semitic people.” Marc Chagall, February 6, 1962.

Sketches for stained-glass windows were Chagall’s paintings. Glass was performed manually at a specialized factory in La Vereri de Saint-Jus-sur-Loire, in accordance with the instructions of Chagall on color. For the manufacture of colored glass used acid and a double layer of paint, and thus was achieved the subtle color shades and gradations. This gave to the stained glass windows by Chagall unique identity and liveliness.

Chagall created his own world, where intricately entwined biblical legends, fairy tales and characters of everyday objects, seen by the artist in a new dimension. And in this dimension there is a sustainable balance of the two worlds, created by Chagall – the real and the imaginary, with a balance of color contrasts, exciting consciousness, shifting logic and visual representations. 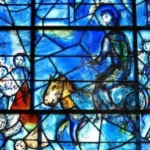 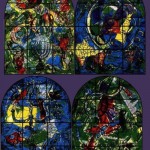 The set of stained glass in a modest church Pocantico Hills, lost in a peaceful province aside from the big cities. USA 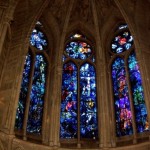 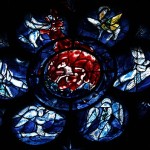 The main stained glass window of the Cathedral of Reims. France 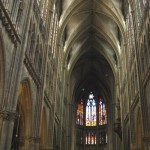 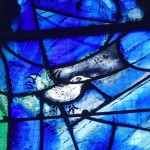 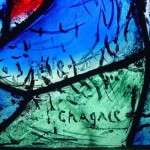 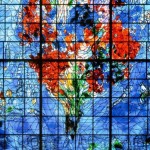 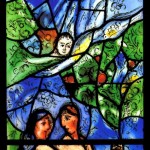 Biblical story of Adam and Eve 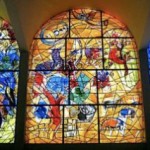 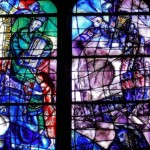 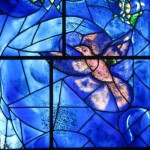 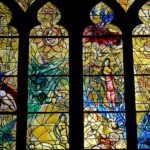 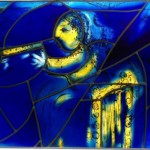 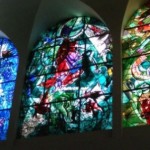 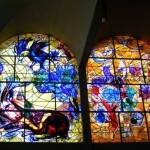 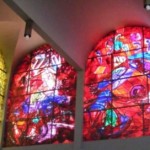 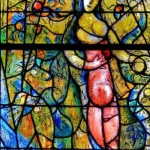 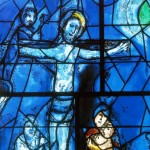 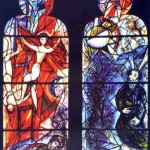 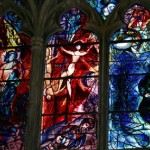 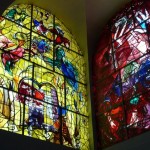 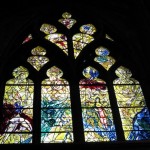